Google Home, Alexa and the rise of voice search optimisation

Google Home, Alexa and the rise of voice search optimisation

You’ve never seen such joy on a four year old’s face. After what seemed to be hundreds of near misses, they finally connected! Initially having a crack at Alexa, and then most recently Google, he was finally able to get Google Assistant to recognise his commands. Result.

Granted, at this point in his life, this means exposing him to some other mindless toddler-bait on YouTube with a ridiculously catchy song and awful animations. But it’s a major breakthrough.

Given the fact he’s only just got his head around spelling some basic words using a pen and paper, he’s now able to call on the extent of his whole library of words  to navigate his way around YouTube Kids. It would have probably been another couple of years until he began to use text-based search terms.

This anecdote from a doting dad is one small example of how voice search is flipping the world upside down and changing our relationship with technology in a way that will be difficult to go back from.

50% of all searches will be voice searches by 2020 according to comscore. We’ve had voice search for a number of years now on smartphones and PCs, what with Google Assistant, Siri, Cortana and the like.

It was with the launch of Amazon Echo that things started to ramp though in 2016. Everyone went Alexa mad, and it was the talk of the table at many a Sunday dinner. Kids swore at it, big kids like me tried to break the logic (not difficult). Even the most technophobic mothers proudly boasted about its ability to tell a joke or two.

Never one to let Amazon steal all the cloud-love, Google got in on the act a year or so later releasing Google Home. It’s since gone on to be integrated into TVs, and Google is boastful of the fact over 400 million devices now carry Google Assistant. If, like me, you’re a huge fan of fearmongering AI cinema, you’d be more than excused for drawing parallels with one of the dozens of films we’ve seen that lean us in this direction. But, in the best interests of not living our lives wrapped in tin foil, whilst muttering crazily under our breath about judgement day – let’s figure out what we can do from an inbound marketing perspective and then make some tea.

To first understand the impact on marketing, we’ll take a whistlestop tour of what people predominantly use voice search for.

I could use this as an opportunity to pad out the article with more words, but let’s face it – I don’t struggle in that regard and tennis elbow is a bitch. So check out this interesting article.

We need to know what people are using voice for, as it lends itself really well to certain types of searches and not well to others. If your product or service, and consequently your SEO strategy, falls outside of some of these trends then voice search optimisation might not be the best fit for you at the moment. As we mentioned before, its popularity is growing all the time and the reach getting broader – so no doubt you’ll have to dip your toe in at some point in the not too distant future.

Mobile voice-related searches are 3x more likely to be local-based than text, reckons Mary Meeker in her Internet Trends Report. Who could argue with name like that.

Amongst the mither of people battling for page 1 and page 2 on certain keywords, many businesses have hacked the process entirely and jumped to the top right of search listing pages for certain keywords with their Maps listings.

It’s fair to say you can get some good results by integrating this approach into your wider traffic generation strategy. And if the rise of voice search as a medium for users is going to continue to accelerate, logic dictates that local SEO is going to be become more and more important as people change the way they communicate with their device.

1 in 5 searches on smartphones originates through voice. As this number is widely predicted to continue growing over the coming years,  undoubtedly we’re going to see more Featured Snippets. The vast majority of the time you ask something of Google Assistant, it’s going to give you an answer from a Featured Snippet.

So what the chuffin’ hell is a Featured Snippet I hear you ask? It’s that section that appears at the very top of the Google search results page – above the rest of the standard results. Because it appears above even the first organic results, you often see it referred to as ‘position 0’. 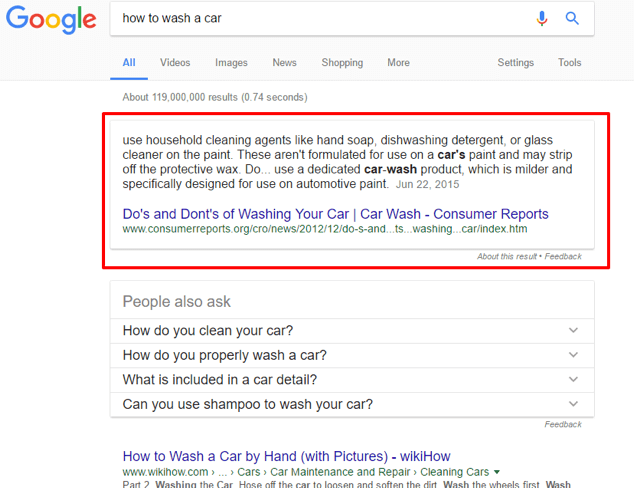 A study published by Stone Temple Consulting in 2017 put the cat amongst the pigeons, confirming that Featured Snippets are hugely popular – coming into the search results page for around 30 percent of the 1.4 million queries they tested.

If this trend continues, Featured Snippets may even begin to rival the top organic listing as the place to be if you want to get noticed.
There so much to talk about in the context of featured snippets that it’s best left for another blog. Hold tight!

Plenty to chew on

That’s probably enough for an intro into voice search. We’ll get a deep dive done on local SEO and Featured Snippets in due course, because both topics warrant one. But in the meantime, if you really can’t wait and you need help implementing this stuff – talk to us now. We would love to help you get some of this away.