I bloody love a good metric. Pageviews, bounce rate, conversion rate, goal completions. Give me a dashboard of numbers with green up-arrows next to them and it’s a good day for me. That being said, even for a seasoned digital marketer such as myself, the number of metrics available on digital marketing platforms can be overwhelming. You are confronted with vast dashboards of data, and you must decide what is the priority. And then you must decide what good looks like.

I’ve covered in a previous article some of the key metrics you should focus on for inbound marketing. In this particular post, I’m going to be honing in on a particular metric and answering the question: what is click-through rate, and why should you care?

What is click-through rate?

Click-through rate, more commonly known by its initialism CTR, is a percentage measure of how many clicks a button or link gets in comparison the number of impressions. You come across CTR in various contexts and across different marketing channels, the main ones I’ll cover here being email marketing and search engine marketing (SEM). But really, CTR comes into play wherever you have a link you want people to click on, and you can measure how many saw that link and how many people chose to click it. It hopefully goes without saying that you are looking for a CTR to be as high as possible on a given link or campaign. There are several things you can do to influence CTR and to give you some idea of how you might do this, I’ll dig into some specific examples where CTR comes into play.

“Clicks” is a metric you’ll often see on a reporting dashboard for your email marketing campaigns. Many platforms also display the number of clicks as a percentage of the number of opens – you guessed it – click-through rate. This usually encompasses all clicks on links within your email (with the exception of “unsubscribe”) so it’s important to distinguish between clicks or CTR on your CTA button vs clicks on the link to your website, or your Twitter profile, or whatever else is included. 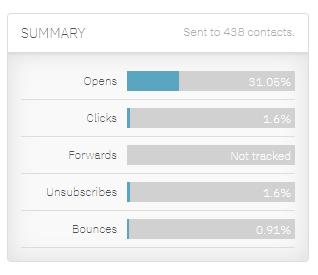 CTR in email marketing can be tricky, as it’s obviously heavily influenced by open rate. If no one’s opening your email in the first place, no one’s clicking. CTR rates can look high if your open rates are low, but they can also be low because of low open rates. It can be useful with email marketing to address low open rates first and see how this affects CTR. If you manage to lift the open rate but the CTR numbers are still low, you need to re-look at conversion within the email. Here’s one I made earlier on how to improve B2B email open rates. But once you’ve got people opening your emails, what kind of numbers should you be shooting for? According to Campaign Monitor, the average CTR in email marketing is 2.5%. Obviously, this can scale based on the numbers you’re sending to, your conversion rate following a click, and several other factors, but that is a good ballpark to shoot for.

How to improve click-through rate in emails

With emails, it’s all about pretty basic conversion logic. Is the content of the message and the offer compelling enough to make people want to click? Is the link prominent and eye-catching? Is the language action-based and clearly describing what the user will do next?

CTR in SEM (am I going overboard on the initialisms?) really falls into two camps – you’ll come across CTR from organic listings, and CTR from paid listings. If you’re primarily targeting Google as your search engine of choice, you can find CTR metrics for organic listings in Search Console, and CTR metrics for paid search listings and Google Display Network listings in Ads. Similar to email marketing, there are several factors which affect actual impressions that could be influencing your CTR. The key difference here is that with paid search, you have some control over increasing impressions – you can bid more, improve your keyword or site targeting, use retargeting, manage negative keywords and more to get a better position and visibility for your ads, hopefully leading to better CTR.

When it comes to organic, there should be an underpinning SEO strategy to get you into the position where your listing is getting a lot of impressions – encompassing content, off-site authority building, and a whole host of other fun things. That being said – CTR is a ranking factor that Google takes into account. So the more clicks your listing gets based on the number of impressions, the more likely Google is to hold you in good stead.

This can vary depending on your industry, your position in the search results, and a whole host of other things. Benchmarking data suggests that for search ads, average CTR is 1.91%, and for display network ads is 0.35%. Organic CTR depends very heavily on your position, and there is a massive difference even between the average CTR for a website in position #1 and one in position #2 – and this is again changing all the time because of the growing prevalence of featured snippets. Some benchmarking data suggests that position #1 gets an average CTR of 31.7 – (note that there are some more interesting stats in this article around features of organic listings and how they influence CTR). If a featured snippet is involved (also referred to as position #0) the landscape changes again. According to Search Engine Land, when a featured snippet is served, position #0 on average it gets 8% of clicks, dropping the CTR of position #1 to around 19%.

How to improve click-through rate on search engines

I’m not going to get into display ads, because that’s a whole different ballgame, but let’s break it down into paid search and organic search. As I mentioned, for paid search, there a number of things you have some control over to try and boost impressions. Once you’ve done this, it’s about optimising ad text with the right conversion language, including the heading and the main text. Then you can bring in a boat-load of other ad extensions which can influence you CTR. These include callouts, sitelinks, call buttons, reviews and ratings, prices, and more. Which extensions you use depends on the campaign, your product and your business, but they can greatly improve the performance of text ads

On the other side of the camp in organic, you’re looking at the relevancy of the page being indexed for that particular keyword, as well as your meta title and meta description being optimised for conversion. Action-oriented language, clear next steps and relevancy to the targeted keyword or keywords are the name of the game. If you want to really get into it, you can try and get a slice of the featured snippet pie – but this is influenced more by your approach to content and content structure. We’ll get into that in another post.

There is so much more to dig into here, so maybe we’ll get into optimising ad text, meta descriptions, text and buttons for conversion in a later post. Watch this space for more on that. In the meantime, if you’d like any more help or advice on improving CTR for your campaigns, get in touch. We help a wide range of B2B organisations achieve higher than average click-through rates with creative campaigns and solid conversion logic based on years of knowledge and experience.